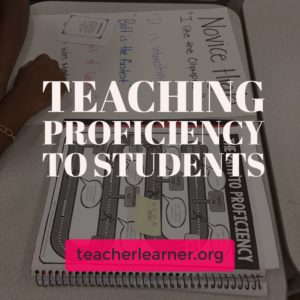 I taught my students proficiency levels today! I know this may seem pretty much common sense to most World Language teachers but this is the first year that I have actually explained the levels and had my students actually discuss samples.

Let me ‘splain! I left the classroom in 2013 and became an Instructional Coach at a middle school. During my time as a coach, I supported every content area but World Languages. Right before I left the classroom, North Carolina was beginning to change their standards to proficiency-based standards. As a result, I never completely made the transition to a primary proficiency-based classroom. I spent a year as a coach before I moved to Georgia. During my first couple of years, I had to reboot myself and become accustomed to a different student population, new standards, and new responsibilities. After two years  in  my new position, I feel now that I am ready to make the jump and transform my instruction even more than I have already done!

I am not saying proficiency was never a priority but it was a priority in a different way and I NEVER explained to the students how they should be setting and reaching goals towards becoming more proficient in Spanish. Because we now have an AP Spanish Language and Culture class and the enrollment in our upper level classes are increasing, I told my department that now is the time to move towards  the way language instruction should be.

SO, how did I teach this to my students?!

Let me preface by saying my plans were not perfect and the process changed throughout the day. However, I feel that I am in a good place and I am confident that my students can self-evaluate and progress towards their goals.

The entire lesson took 35-40 minutes (time well spent) depending on the questions the students asked. Some of them had really great questions and observations! We did A LOT of discussing and I continuously did comprehension checks to make sure they understood.

The lesson was done in English because we did the same lesson and used the same resources in both our Spanish and French classes. The only difference was the actual samples that we used to demonstrate the levels.

Overall, I think the lesson went well. Even one of my students gave me the thumbs up and said I did a good job (I wish they got that excited when we are actually discussing topics in the target language).

How do you teach proficiency to your students? I am open to suggestions because I have to do this again next semester and am looking for ways to improve.

1 thought on “Teaching Proficiency to Students”