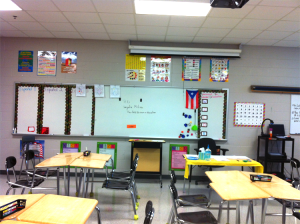 A few years ago, I was presented with a set of classes that were somewhat challenging. All of my previous classroom management strategies just did not seem to work with this crew. I wrecked my brain (and the internet) to research other alternatives. As a high school teacher, I never shied away from using elementary strategies for my high school students. After all, they are still children and they should have rewards as well as consequences.

The system I decided on had to serve two different purposes: award individual students AND manage groups (my students were seated in groups most of the time). I wanted to teach the students the importance of collaboration and teamwork.

I got to work and created a behavior chart. Each of my groups had a number and they were placed on the behavior chart in the middle at the beginning of each day. This is very similar to the way elementary teachers monitor behavior for their students. Because I taught 90+ students instead of 30+, I had to make adjustments. The groups moved up and down the behavior chart as I saw fit during the period. I NEVER moved the cards; I always had a member of the group move the card. Wherever groups ended that day determined what reward or consequence the group received. I made sure to exhaust all of my options in the classroom before contacting administration (I never had to contact administration).  Students moved up and down as many times as needed. Because I wanted to really focus on the positive behavior (PBIS), I rarely moved the students past neutral. My intention was to REWARD much more than issuing consequences.

The next step was to set up a reward system for individual students. As a class, we brainstormed types of rewards that the students would like to “purchase” from the class store. Don’t be alarmed!!! Most of the rewards we chose did not require me to spend a lot of money! After compiling the list, I assigned values depending on the type of reward. Students earned “pesos” when I wanted to reinforce a particular behavior. When we had visitors to the class, they even had the opportunity to pass out “pesos” if they saw behaviors with which they were impressed.

I must say that this worked very well for my students! The groups began holding other members accountable and the students as a whole went the extra mile to make sure they were on their best behavior and to help one another. You would be amazed what high school students would do for a stick of glue! I don’t necessarily recommend this system for all classes and many educators are firmly against behavior charts. However, in that moment, I needed to do what was necessary to ensure that learning was always taking place in my class.