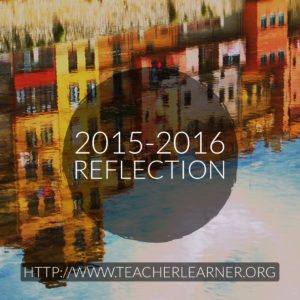 At the end of each year, I always spend time reflecting on the previous year. I use time during the summer, tweaking lesson plans and creating activities. I think about what worked and what didn’t. I ponder my students’ performance and how I will try to motivate them during the upcoming year. So, how was the 2015 – 2016 school year? What will I do differently? What things will I refuse to change?

This was my first year teaching AP Spanish and I must admit, it didn’t go as planned. I went into the year looking forward to the class but after the first couple of weeks, it went downhill. Partly my fault and partly my students’ fault but I will assume all the blame. I thought I had an idea of how I wanted to run the class but my students didn’t share my enthusiasm. Sadly, I let this affect me and I did not do as well as I could have. To save time, I won’t go into class makeup and such…that’s a whole different post. For now, I will focus on the things I will do differently.

2) Because my students are coming to me from Spanish 3 instead of 4 or 5, I need to add much more rigor in Spanish 2 and use AP-type assessments throughout the year.

3) My intentions at the beginning of the year was to administer a sample test from beginning to end. Time flew by and before I knew it, we were already in April and days away from the test date. After speaking with my students, I know I need to find time make this a priority.

Even though my students did not do as well as some people would have liked, I was proud of them. They felt that the practice activities were beneficial and prepared them for the test. I have connected with a couple more AP teachers and we have formed our own little PLN. I know next year will be more productive and more successful.

I regret that I had so much going on that it prevented me from providing more timely feedback. This is one of the most important aspects of teaching and I dropped the ball. To make it easier to grade and provide feedback, I will use much more technology and have students submit more assignments electronically. This has worked well for me in the past but I abandoned this practice when I switched schools. There are several tech tools I will use but Office 365 will be my go-to for most things.

I first flipped my classroom during the 2012 – 2013 school year and it was the best thing ever during that first year. It worked well, my students learned, and I was well organized (for the most part). For the past 2 years, however, I have been met with some tough challenges. The primary issue has been students coping each other’s notes instead of watching the actual videos. As a result, they still don’t fully grasp the concepts and are unable to communicate or complete class activities. If they were unprepared for activities, this totally defeats the purpose of flipping. For the upcoming year, I’m going to be using EDpuzzle. With EDpuzzle, I’m able to embed questions to check for understanding while they are watching the videos. I sometimes have them answer a couple of questions when they get to class but was not consistent. Next year, I will people to determine what they didn’t understand before they get to class and I can adjust my lesson plans as needed. They will be required to complete the videos through EDpuzzle and will receive a grade for their notes and for complete the comprehension checks.

Wow! That was long! If you read to the end, thanks! There will definitely be a part 2 because even after 12 years, I have tons of room for improvement.